“THE MOVIE WITH A MISSION”

A PRISCILLA A. PRODUCTIONZ FILM

“In winning an Indie, Priscilla A. Productionz joins the ranks of other high-profile winners of this internationally respected award.  Thomas Baker, Ph.D., who chairs the Indie Fest, had this to say about the latest winners, “The Indie is not an easy award to win.  Entries are received from around the world.  The Indie helps set the standard for craft and creativity.  The judges were pleased with the exceptionally high quality of entries.  The goal of The Indie is to help winners achieve the recognition they deserve”.

“The premiere of Reunited makes the frontpage of the Dallas Examiner 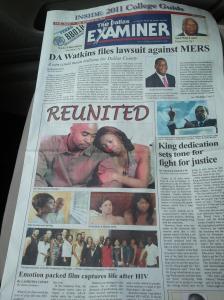 “I’ve got to add that this theme, the movie has been on my mind the entire week. I think the first part of this would be the message and prepare it for educational avenues such as schools. I love the character you protrayed and how you showed a feeling that we all wished we could find. Unconditional love and be there for someone just as they would be there for you”.